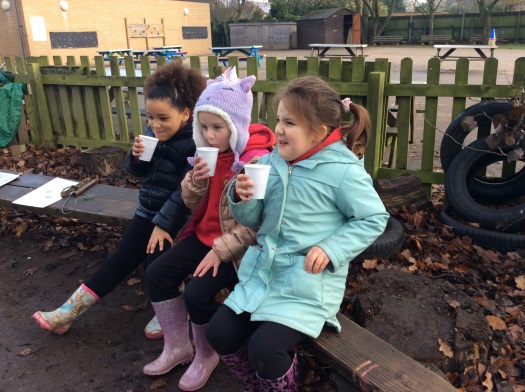 I liked drinking hot chocolate in the forest area. It made me feel warm. (Dylan.)

I liked making the snowman and Christmas trees in forest school. (Beau)

I really enjoyed making a moving picture. I did some good colouring too. (Finley) 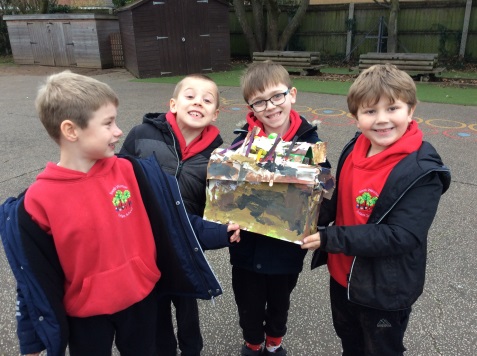 I liked learning how to find fractions in maths. (Freddie)

I liked learning how to make a shelter using different materials and then testing to see how strong they were. (Lillia)

I liked swinging in the hammock (Sophia)

I learnt and enjoyed sawing to cut a disk. (Broden)

I enjoyed making a cat toy in forest time.(Thomas) 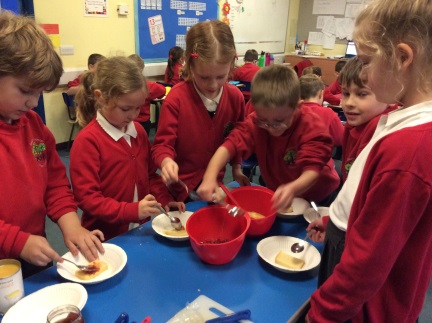 I liked learning how to add tens and ones to add two 2 digit numbers together. (Evie)

We have been learning about Edith Cavell, who was a nurse in the war. She helped soldier not just on her team but on every team. (Tayler)

In the forest school, we toasted marshmallows, we made a special stick to toast them so that we didn’t get burnt. (Freddie) I liked making the fairy pegs. (Isaac) I liked making a broomstick. (Luella) I enjoyed making my cutting sword tool. (Broden)

In English we learnt about non-fiction books and how to write facts. We learnt lots about wolves and organised information under sub-headings. (Lillia)

I have liked spending time with my teachers. (Ellamea)

In maths we have been counting down. We had to count down from 100 and work out which number came next. (Rowan)

In art, we sketched wolves and used HB, 2B and 4B pencils to add texture and shading. (Elsa) These pictures have been added to our display board.

We have been learning our capital letters. We had to match capitals to lower case letters on a train. I enjoyed this. (Mollie)

I really enjoyed making potions in the Forest Area. I used mint and other leaves and water. (Joshua)

I enjoyed reading in Guided Reading this week. We read the story Hans in Luck.(Ellamea)

I liked learning about a healthy diet and we had to draw a healthy meal. I added carrots and broccoli. (Eleanor)

I enjoyed my school lunch. It was fish finger and chips with beans. (Broden)

My favourite thing I have learnt is about Florence Nightingale. I liked sketching a portrait of her. (Beau)

I liked doing handwriting because it’s a good time to practise joining your letters up. (Logan)

On Tuesday we listened to different genres of music and we thought about the different rhythms, for example short, short, long sounds.(Can you demonstrate?) We listened to an African sung at weddings, where the singer clicks in their throat to make some of the sounds.  (Isla, Evie and Isabella)

In maths all week we have been learning how to deal with different amounts of money, adding and taking away.  (Evie)  We had pictures and went to a ‘shop’ to buy different items.  We had to add the amounts together to find the total.  (Primrose)  Today we had to find change, by taking amounts away.

In IT we practised logging on to Purple Mash and used Science and Geography apps. (Madeline)

Yesterday and today, we have been designing a new pizza restaurant,  to help out Pippa Pepperoni who wants to open a new restaurant in King’s Lynn. (Blake)  We had to make a poster about the restaurant (Peter).  We had to think about all the facilities that the restaurant should have (Lacie D) and design some of them including a menu (Alfie)

During guided reading some of us have been learning about Russia. Frankie says it has the deepest lake, the longest river in Europe and it is the biggest country in the world.

Today we have been out on our bikes (Harry) and we have been learning how to overtake (Ruby) and some of us have been practising how to bike with one hand! (Thalia). Some people were a little bit wobbly!